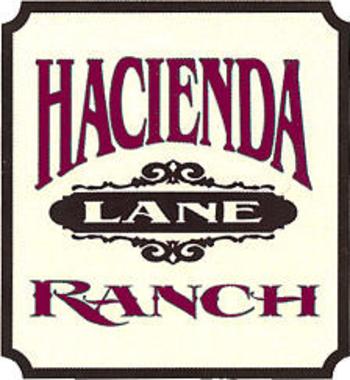 HACIENDA LANE RANCH  - TUCKED AWAY IN A LITTLE VALLEY NEAR QUARTZ HILL.
The Ranch is now home of the California quail being protected by Frances  from hunters.  Hunters at one time considered this area as one of the best places for quail hunting for many years, it was a popular place for hunters and card players to be entertained by fire place in the cabin where William Plecity, the Eskimo Pie Man from Los Angeles entertained his friends. The history is a big part of the ranch, but the fireplace and the trees are the most recognizable, as the remodel was major to turn this to mission style hacienda.
The Ranch has been owned first by William Helfrich from Finland, who homesteaded the property. The second owner was William Plecity, the Eskimo Pie Man from Los Angles, who bought the property in a tax sale. The third time the property was purchased and is now Hacienda Lane Ranch.
The ranch has been a hidden paradise since the turn of the century; it is where the desert ends and the foothills begin. The first address was Box 1, Palmdale, and Ca. when William P. Helfrich (1876-1938) homesteaded here in the Belleview (Quartz Hill) district of the Antelope Valley. Helfrich was a bachelor from Finland. He planted almond trees and lived in a little one-room house, it was where my bedroom is now. He was recognized as an authority on astronomy and weather forecasting. Helfrich was the Bellview school clerk and served on the District board.  Upon the death of Helfrich the property went to a tax sale, as he did not have family in this country.
My Dad, Frank Lane tells of Mr. Helfrich walking down to my Grandparents for Thanksgiving and bringing almonds from his orchard.  They were glad to have him share the day and he always got a ride home, he lived so far back in these hills and did not have a car for many years.  Neighbors always were helping him when he finally got a car; they said he was not too mechanical.  Dad also told me that before Godde Hill Road was built, the pass at the bottom of this canyon was the trail for wagons, horses and buggies from Antelope Valley to Leona Valley.  Believe it or not I had friends, Mike and Flora Herman family and friends that drove their wagon and team of mules over here from Leona Valley one day, so it still can be done.  They took the low road at the bottom of the canyon where there is a gate.

My Grandfather, George W. Lane had property adjoining the ranch and was a friend of William Plecity.   He told Plecity about the upcoming tax sale.  Then Mr. Plecity, the “Eskimo Pie Man”, from Los Angeles bought the ranch.  He then leased property to my Grandfather to dry farm, which did not last long planting in the hills. Today there is still volunteer wild oats coming up on part of the hills from that time.
Frances Godde was among Plecity’s good friends, He would see him often, visiting him here at the ranch, enjoying a good time playing cards and catching up on the local news.
William Plecity, the Eskimo Pie Man from Los Angeles, bought this property for his weekend hunters’ cabin; he entertained his friends with card games and quail hunting.  He built a cabin with a 50-gallon drum for his septic tank; the fire system was lard buckets full of water placed around the house.  He built a nice rock fireplace, which is part of the house today.   The windmill, spring, and the wonderful trees he planted are still a big part of the ranch.  William Plecity was quite a pioneer and interesting man.  There was a spring on the property, but Plecity dug a well and had a windmill.  He had pipe all over the place to water the trees, he came up on weekends to enjoy the country, water the trees and enjoy the many friends he made here.
One day there was a hand painted for sale sign on Godde Hill Road, that is when I found out this old ranch was for sale.  There was a little overgrown dirt trail coming back to the cabin with a sign “ARMED GUARD ON DUTY NO TRESPASSING.” Scared to come back, it was spooky, but curiosity overpowered fear and looked around anyway.  There had not been anyone here for a long time, in the kitchen area a table was all set to eat, but nobody ate after setting the table.  There was even salt and pepper on the table.  I was trying to figure out when the last time anyone had ever been here, as there were some things left in the house, although it looked like no one had been here in years.
After the property was purchased Mr. Plecity came to pick up what he wanted.   There was not much to take and he left the rest to sort through.  His wife had died years before and I felt like I wanted to preserve something of hers so I kept her poem book.  It was strange sorting through someone else’s belongings, trying to save what no one else wanted.  I was even picking up old newspapers and Saturday Evening Post magazines out in the bushes; later I wallpapered part of the house with them, they were antique and survived the weather for many years
I can remember as a kid looking down the canyon and wondered who lived back there. It was like a mystery and little did I know that someday it would be me.  I must have planted the seed just thinking about it and now enjoy the place and all the work that goes with it. He could not have sold the ranch to anyone that would appreciate what he had done more than I.
I looked forward to his visit once a year, when he came up for the old-timers Barbecue.
What is rare in California is there have only been three owners of the property.  The first time it was homesteaded, the second time it was purchased at a tax sale and the third time purchased from the owner. The ranch is a result of what all of us have done since the turn of the century; it is a place that will never be finished, as there is room for more imagination.  The fun part is working at it.
Living here has been a privilege and a pilgrimage into so many new worlds, water drainage and flood control down the driveway, road maintenance, fire breaks, building arts, horticulture, preservation, fountain and pump experts, pond people, roofers, veterinarians, horseshoes, trail riders, hunters, aerial photographers, surveyors and trespassers to name a few.
Hacienda Lane Ranch has been a fun journey, an adventure, a challenge, an exercise in delayed gratification, a work in progress, a wild ride, a labor of love.
Hacienda Lane Ranch for many years has been a place for horses, trail rides, community events, fund-raisers, weddings, wildflower walks, barbecues, dancing and fun.  It is a pleasure to share with those who like the charm and essence of Hacienda Lane Ranch.